The mobile armband race continues to be the best in the world. Operators are not just trying on a new 5G technology that will revolutionize the entire market. The LTE (and more specifically LTE-Advanced) networks are further developed. 256 QAM modulation increases the maximum theoretical speed increase by 20%, but this is not enough. Verizon is planning to use LAA (Licensed Assisted Access) technique, which allowed it to reach speeds of up to 953 Mbps outside the lab.

Whenever we talk about new solutions accelerating LTE networks, we also have to bear in mind the sad reality. It is not only that the theoretical maximum speeds provided by the operators are only obtained near the base station and in the absence of other users. The problem is also that such speeds are very difficult to obtain under real conditions. What the operators say, or LTE standardization organizations, is not a lie. However, the maximum speeds (e.g. famous recently 1 Gbps) are usually achieved only under laboratory conditions. 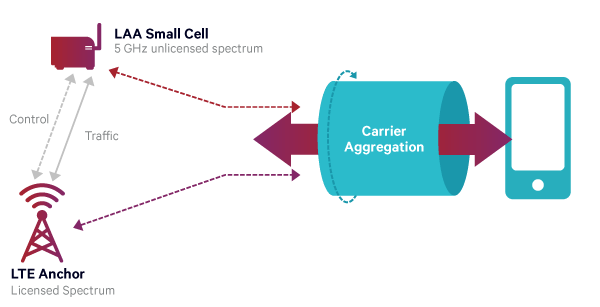 953 Mbps achieved by Verizon is the result of aggregation of classic LTE bands and unlicensed 5 GHz band.

In the United States there is currently a big battle between four operators: AT&T, Sprint, T-Mobile and Verizon. The last two like to churn each in media. This time Verizon showed everyone who is real no. 1 in the USA. The operator, in partnership with Ericsson and Qualcomm, has demonstrated the true wireless 1 Gbps wireless. All this was achieved on real hardware installed in Boca Raton, Florida. Ericsson for its part has provided a radio module that supports LAA (Licensed Assisted Access). This is part of the 3GPP standard describing the LTE Advanced Pro network. Qualcomm has provided the prototype device with a Snapdragon 835 chipset and a Snapdragon X16 modem for testing purposes.

TMo eats crow. When the verified last place network crows about made up network quality results they pay for. #factsmatter #TMoIndigestion pic.twitter.com/DUkZ2XkG2B

T-Mobile has been rumored to be the first operator to offer LTE network with speeds of 1 Gbps. This was confirmed by laboratory tests showing 979 Mbps achieved by carrier aggregation of 3 bands, 256 QAM modulation and 4×4 MIMO. However, T-Mobile used 20 MHz channels in each band during this test. Unfortunately, none of the operators in the United States have purchased licenses for such resources. That is why Verizon wants to achieve the same result with unlicensed 5 GHz band, which is exactly what LAA does.