I know that benchmark results do not reflect 100% of the performance that mobile devices offer during their daily use. However, all the information about the test results of the new smartphones cause a lot of emotion. It was obvious, but now we had confirmation. The Samsung Galaxy S8 will be the fastest smartphone on the market. Apple needs to give up, because the iPhone 7 Plus score is a few percent lower.

In the past we had a lot of photos, which showed the alleged results of the AnTuTu benchmark for smartphones that were still waiting for their premiere. Sometimes the authors of such alterations had a problem with mathematics because the sum of the results from the partial tests did not match the final score. This time we are dealing with material that looks quite credible. The Samsung Galaxy S8, marked as SM-G950 model, achieved 205 284 points in the AnTuTu benchmark. What does it look against competitors? In the same test, the iPhone 7 Plus drew 181 807 points, while OnePlus 3T, which was by far the most efficient Android smartphone, gained 162 423 points.

It is not known which version of Galaxy S8 was tested

Samsung released its flagship with two different chipsets a year ago. The new Samsung Galaxy S8 and S8+ models are expected to be available with Qualcomm Snapdragon 835 and Exynos 8895 processors. In case of Galaxy S7, the Qualcomm version was sold in China and the United States. The model available in Europe was equipped with an Exynos chipset. I do not know how it will be with the Samsung Galaxy S8. Personally, I prefer Qualcomm chips because it’s a proven product and used by many manufacturers. But honestly, it does not matter much. For example, all Galaxy S6 models were equipped with Samsung’s processor, also no one complained about the European version of the Galaxy S7.

Exynos 8895 can be more efficient than the Snapdragon 835

According to test results found in Geekbench benchmark database, the Samsung processor is faster than the Qualcomm chip. This applies to both single and multi core tests. The differences are small (from 2.5% to 4.8%), but it is a great surprise for the observers of mobile processors market. So far, the Exynos family had always been a little less efficient than their Snapdragon counterparts. 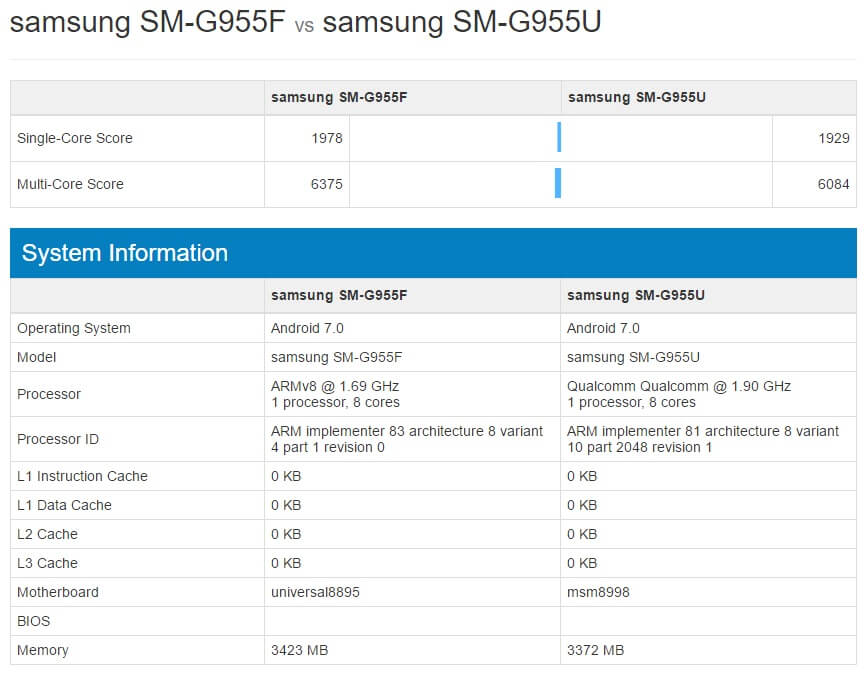 Yellow? Galaxy Note 9 will be presented on August 9